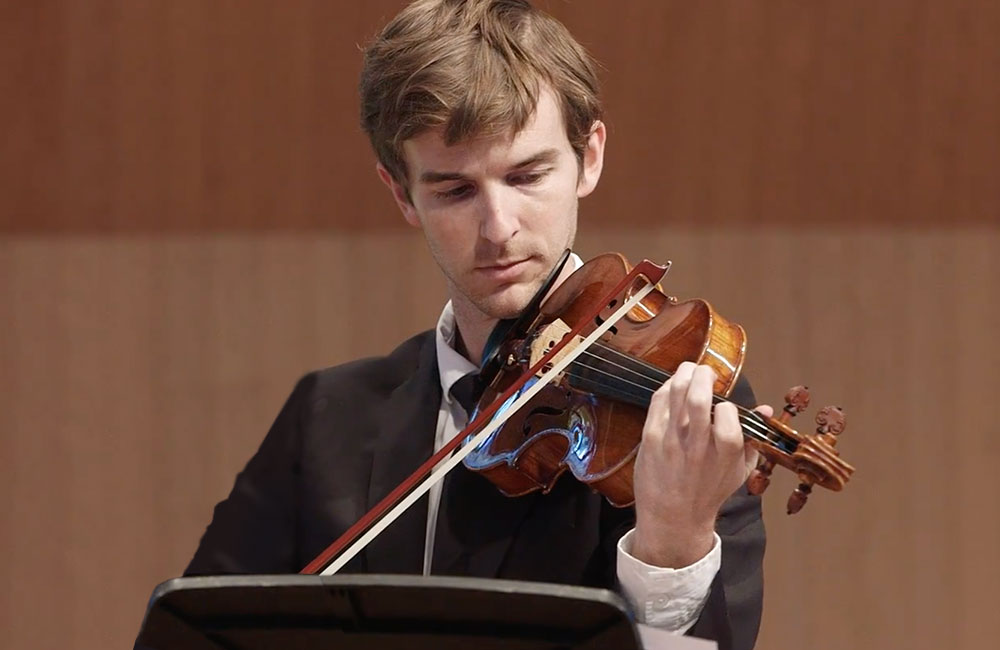 Floyd, who studied composition at both the San Francisco and Biola University Conservatories of Music, dedicated the work to Granger. “Ever since I met Alex, I knew I had to write something for him. It was his idea for me to compose a violin concerto as my Masters Thesis,” said Floyd. “Alex is probably the most devoted musician I know.”

Violinist Granger holds a performance degree from Biola University, where he was named the conservatory’s Presser Scholar and held the post of concertmaster of the Biola Symphony Orchestra. Currently, he is working to complete his Masters as a Sima Mannick Endowed Music Scholar at the University of Southern California’s Thornton School of Music.

Granger plays and performs on a recently acquired 2010 Stradivarius model crafted by Benning who is considered a modern master violinmaker. It features an antiqued varnish after the 1725 “Da Vinci” Strad. The instrument is, according to Eric Benning, “a great solo instrument, powerful and capable of producing bright clear tones.”

Floyd’s concerto is comprised of three movements, the first of which the composer titles “Pensive – Fast, with Thick Energy – Seething” and features a cadenza. Movement 2, “Breathing, Longing” and Movement 3, “Wild” follow the first movement, which the composer describes as “the heart of the piece”.

“Premiering Lucas' violin concerto was one of the most difficult and rewarding experiences I've ever had as a musician,” added Granger. “It was the first time I didn't feel like I had to interpret the music based on certain performance standards. A few days before the performance, I realized that my interpretation was the standard, and that I was free to communicate the music exactly as I felt was necessary.”

Benning Violins has become a mainstay institution on the West Coast for premier performers – as well as other concert and performing artists, renowned teachers, amateurs, students and players of all levels since 1953. Fine violins, violas and cellos crafted by Eric are played by a number of premier players, concert performers and recording artists.

of the premiere of Lucas Floyd’s violin concerto.