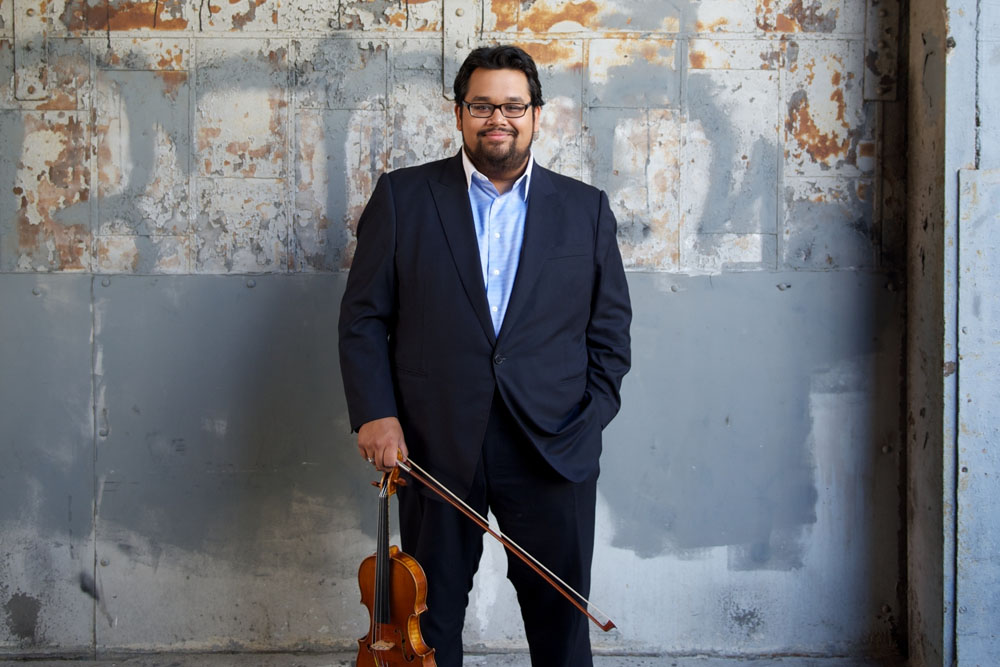 Vijay Gupta, a violinist in the Los Angeles Philharmonic, has recently acquired a violin crafted by Los Angeles violinmaker Eric Benning. The violin, Benning's 104th instrument, is modeled after a violin by renowned Italian violinmaker Carlo Bergonzi. It was crafted by Eric in 2015 and is made with Bosnian maple from the late 1940's. The top was made from Northern Italian spruce from the 1920's.

How did you become aware of Benning Violins?

I started coming to Eric’s shop the moment I moved to LA. I was living on the Westside at that time and this was back in 2007. I joined the orchestra when I was 19 and one of the first friends I ever made in the orchestra was Mitch Newman who is a violinist in the first violin section and is now a dear friend of mine. When I joined the orchestra the members became my friends and mentors. The first question you ask: What’s a good violin shop I can go to? One of the first names that came up from Mitch was the Benning shop. So I came here.

I think I first met Hans and I had a new violin at the time made by a violinmaker named Anton Krutz who was in Marion Kansas. It was a violin made in 2003 and I played my audition on it. I had been having trouble with it out here because it was a brand new instrument and it wasn’t adjusting to the LA dryness well. So Eric took a look at it. I would bring it in every so often because I was just fighting with this violin and I was kinda blown over by Eric because he was so humble with his approach to this instrument. There were significant issues with this instrument that he could have worked on and fixed but he said, “I didn’t make this violin. I want to check with Anton first and I want to call him up and talk to him and make sure he’s okay with me working on his instrument.”

I was blown away by Eric who could have easily done any of the work that I would have paid for right there. What was really clear was that there was integrity and loyalty that was so important, that came from this place of respect for the instrument and his craft. Even for this instrument that he didn’t make. Even an instrument that was really being a bear that he probably had solutions for. That instrument is somewhere in this room now because I traded it in for one of Eric’s violins! It’s really special to finally make that leap to being part of this shop and being part of this family.

How did you end up playing on Eric's violin?

I feel so lucky to be playing on the LA Phil’s Montagnana violin and there are certain places where I can’t take this instrument or times I have to turn it in to have it looked at. Eric is the person who I trust here in town to take a look at the Montagnana violin. He has so much experience with older instruments. So whenever I would turn in the Montagnana, he would hand me one of his fiddles and say, “Hey I just finished this violin. Play on it for a while.” And I remember, I think, last Summer I played on a Balestrieri model and I just didn’t want to let it out of my hands. It was so beautiful and there is so much delicious promise in an instrument like that. It’s like, it’s ready to open up, it’s ready to blossom, it’s ready to change.

Actually someone, a wonderful violinist in the Pacific Symphony who I sometimes work with as a teacher, she bought that instrument and she had been trying to tell me that she bought it used, but I didn’t realize it was that instrument that she bought. So I was thinking, that was strike one. I shouldn’t have let that violin out of my hands. Recently I just gave a talk in Canada at the beginning of February and with travel restrictions and traveling abroad with Instruments like the Montagnana, it’s really difficult because of restricted materials and God forbid something happens, I would hate for it to happen to that instrument, which is priceless.

So I asked Eric if he would be willing to let me borrow one of his violins and he said “I just finished this Bergonzi model. Why don’t you borrow this?” And again, it was like, this is even more something I didn’t want to let out of my hands. I avoided phone calls from Eric for a while because I just wanted to keep playing on it. I didn’t even want to come back to the shop and hand it in. It was at that time that I just realized that, wow, this is something that has to happen. There was no feeling in my gut of, “Oh is this the right thing to do?” It was the most natural thing and Eric made it so, so easy.

What are the characteristics of the violin that you appreciate?

It’s big. I really enjoy how it feels in my hands. It feels like it sits and is part of my body in a way that I really enjoy. I feel like I’m set up for that instrument. It has a dark quality to the sound. But as I begin to learn the instrument, I begin to find ways that focuses the sound. Once I focus the sound on an instrument like that, it wakes up the entire instrument. So just as I was saying with the Balestrieri, I’m finding ways of opening up that instrument. Then hearing colleagues playing on it in the concert hall is really really fantastic as well. I work really closely with another violinist in the philharmonic, Jin-Shan Dai, and we play in a quartet together. So I actually handed Jin Eric’s Bergonzi model. Jin was playing on the orchestra’s Pressenda, and side by side they sound really similar.

I actually also moved on buying the Bergonzi because my colleagues were really crazy about it as well. I had colleagues that were like, “What is that? What does it sound like?” So now there are a few of Eric's instruments on stage at the LA Phil. It’s just really special to have a buy in with someone who is part of this community. Not just someone I trust, but I'm supporting a local maker who I can come back to. This is the way it was in the shops of Stradivarius and in the shops of Guarneri. They worked with the people they were making instruments for. Because of those first couple of years of nurturing that grew out of the relationship that a maker had with the player, that’s why those instruments exist today.

There’s a beautiful violinist named Ivry Gitlis, who I love, and he says, “It’s not that the violin comes into my life, that I own the violin for a time. It’s the other way around.” You know the violin, I’m a guardian and I’m a blip in her lifetime and hopefully she’ll live much, much longer than I will. I can’t wait for the day that someone plays on a Benning instrument 300 years from now and says, “Oh my goodness, John Adams was alive during this time.” What a cool thing.