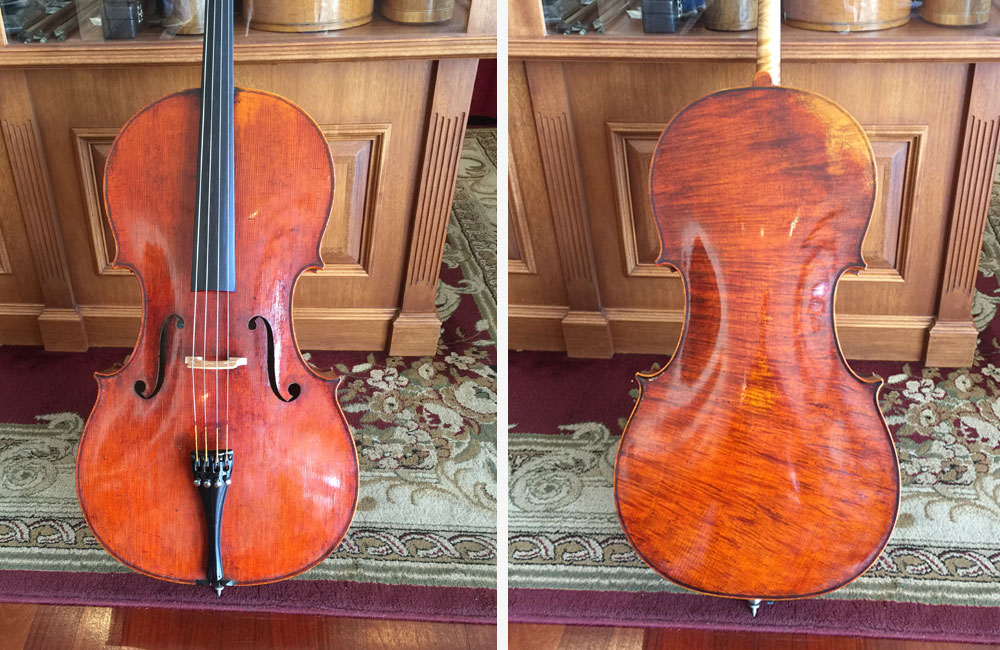 Of the many fine cellos Eric Benning has crafted in his Los Angeles violin shop, he was convinced this particular cello would be his last.

Violinmaker Eric Benning has just completed work on his latest cello on March 30th, 2016. While the announcement of the completion of any cello crafted by Eric is always welcomed news, this particular cello is special because of the interesting story surrounding it.

In October of 2014, Eric was severely injured in a motorcycle accident that left him in critical condition with several broken bones and internal injuries. Eric's recovery was a long, slow and painful process that kept him away from his bench - and making - for much of the year. Family and long-time Benning customers were relieved to know that Eric's hands hadn't suffered the sort of damage that would inhibit or end his instrument making.

About this cello, Eric states:

"The cello I just finished was begun in early 2015. I started it shortly after my accident with the purpose of seeing whether or not I could even make another cello again. As one can imagine, the physical demands of making a cello are much greater than that of making a violin or viola. I used the best wood I have, especially since I thought this cello could be my last."

"The back is a one-piece, quarter-cut maple from Bosnia circa 1950. The top is Italian spruce from the late 1920’s with a lot of hazel spruce markings. I antiqued the cello in the style of the “Christiani” Stradivarius cello. The neck is also supported on the inside by 3 Carbon Fiber struts to prevent the neck from ever warping or deflecting over the years. The sound is dark and powerful already. It needs to be played in a bit before I do any real adjustments to fine tune the sound."

This very special cello is available for examination and trial and has recently been added to our catalog of fine cellos for sale.

If you wish to inquire further about this cello, please contact us or call 1-818-762-1374 during business hours.