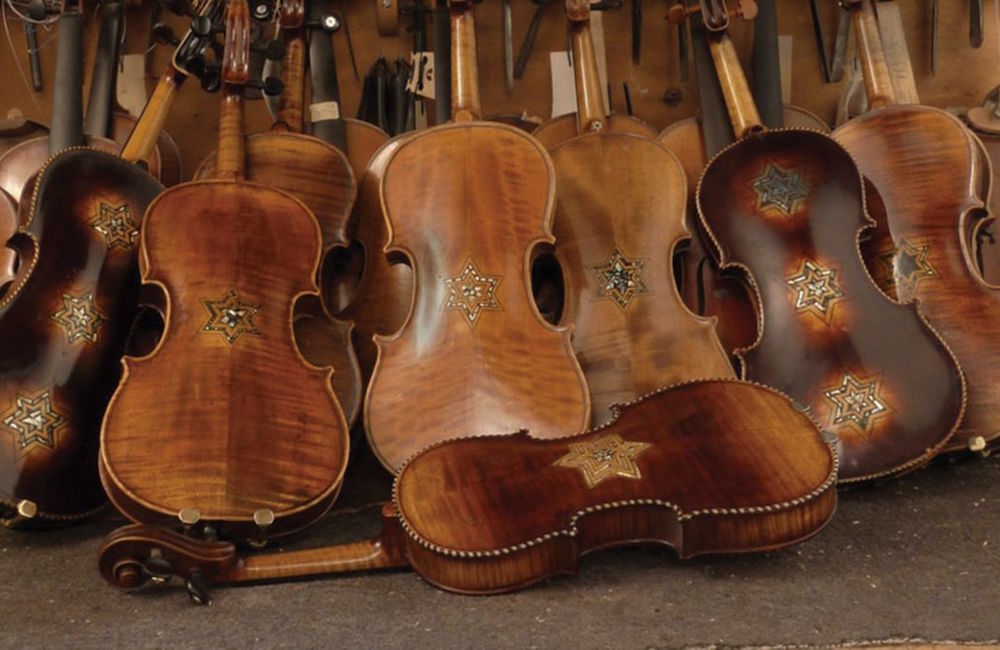 While not intrinsically great instruments, Jewish-owned violins, cellos and violas that somehow survived the concentration camps live on in concert.

Among the many perverse facts of the Holocaust is there were camp orchestras. Talented instrumentalists from the Jewish and “Gypsy” (Roma) communities involuntarily held by the murderous regime were put to work to provide music. Their audiences were new arrivals as they disembarked from cattle cars, some as they were led to certain death while others judged healthy enough to work to barracks. Some of the musicians were forced to entertain their captors at parties.

Since 1996, the father and son team of Amnon and Avshalom Weinstein, based in Tel Aviv, have been collecting the violins, violas and cellos that were owned by these camp musicians before and during World War 2. The collection has grown to more than 60 instruments, each with a story: Some were used in the camps; some were tossed from those trains as they were headed to the camps. The collection is known as the Violins of Hope.

One instrument in the collection, the Auschwitz violin, was made around 1850 in Germany and was purchased in the post-War years from a penniless survivor. Like many of the stringed instruments, it was neither rare nor valuable. Another German-made violin, circa 1900, was tossed from a train traveling from France by a desperate man who said “In the place where I now go I don’t need a violin – here, take my violin so it may live!” A worker obliged his request but never played it. Decades later his children told the story to a violinmaker in the South of France who purchased it and turned it over to the Weinsteins for the Violins of Hope project.

But Violins of Hope is more than instruments that the Weinsteins have restored to playing condition. It’s a series of concerts using these instruments, held around the world, accompanied by discussions on the significance of the instruments. Despite the fact these are not Stradivarius violins, virtuosos the likes of Shlomo Mintz (Jerusalem), David Russell (music professor at the University of North Carolina) and others play them. Upcoming concerts in 2019 and 2020 are in Louisville, Kentucky; Fort Wayne, Indiana; San Francisco; and Los Angeles.

Amnon Weinstein told National Public Radio in 2012 that violins were commonly displayed on the walls of Jewish homes, particularly among Orthodox Jews who were forbidden from displaying portraits or sculpture. He was first asked to restore one such violin in the early 1960s by a musician-survivor who had been part of the Auschwitz Men’s Orchestra, but Weinstein was repulsed by the presence of ashes inside the instrument and refused to work with it – in part because he himself had lost many family members to the Holocaust.

Weinstein’s emotions on that softened by the 1990s when he launched Violins of Hope. “All instruments have a common denominator,” he says on his website. “They had to do with the war. To be more specific, they had to do with the Holocaust –­ death or survival. And hope. All instruments were symbols of hope and a way to say, remember me, remember us. Life is good, celebrate it for those who perished, for those who survived. For all people.”

That clearly includes the doomed violinist on that French train. His violin miraculously survives. “The sound of violins is often compared to the beauty of the human voice,” Weinstein writes. “When played with talent and spirit, it is known to reach out and touch hearts. This was the role of violins in the war –­ to touch hearts, kindle hope for better times and spread it around. Wherever there was music, there was hope.”